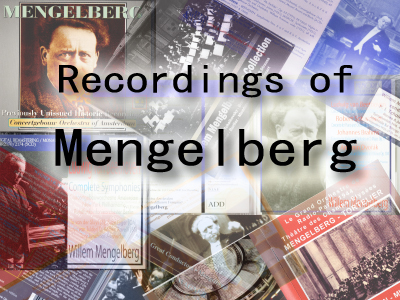 This page summarizes the Mengelberg of Beethoven’s Symphony No. 5, “fate”.

Now, we have a total of four types of Mengelberg Beethoven Symphony No. 5, including the first movement only.

In this site, a date of recording is the date of Netherlands Willem Mengelberg Society as reference.

For more information about each recording, I analyze here: The results of analysis of the recording of Mengelberg Beethoven Symphony No. 5

Recording that we have now

First movement only (other movement seems to have not been recorded)

While there are four types, which has also different playing impression.

This is the feeling and marks the impression in one sentence without fear of misunderstanding.

1922(NYP) is portamento most effective performance. (I feel sexy)

1940 is the most dense performance.

Individual by the impression is different.

Analysis of the difference of each recording, but was another page, and then extract only the first movement of the playing time.

Since the first movement begins with a rest, it’s time was measured until the end of the sound from the first sound.

In the session recording with the NYP and live recording take the time that about six minutes and 17 seconds, however, in the studio recording of the Concertgebouw take the time that the 7 minute of the second half. Yet the performance of 1937 and 1942 will have a different impression of listening.

By the way, the data of the Netherlands Willem Mengelberg Society will be following.

From the sound of the before and after playing in here time also seems to be included in the time.